4 GOLDEN STEPS TO MAKE MALAYSIA A SH*T HOLE OF A NATION SOON!!


4 GOLDEN STEPS TO MAKE MALAYSIA A SH*T HOLE OF A NATION SOON!!

- More Tol,  Foce Citizen to pay more for cars that is half the price in Western Society, More Bahasa Malaysia Tax Education system that Force you to learn a stupid Racist History in order to Earn your Diploma,  More Taxes when you leave the country, Extra Tax if you are not Loyal to sultan-Agong- IS ISLAM and Malay Race (Dhimmi Ideology and Implementation strategy!

3  Divide the Rich and Poor.  Reward poor exam result and overlook superior result.   Just make Malay Arab Tudung as Superior Professor and Chancellor and other race report to these Anti ICC Anti Icerd NIT WITS racist scumbags!  Make the Arab Malay race poor and stupid by ENDLESS SUBSIDY Felda, Tabung Haji, Shariah....yet Exploit them via religion and Race to retain power ...Just like what Arab IS ISLAM Racist anti Icerd  Sultan-Agong-govenor UMNO-PAS and racist leaders are promoting daily for 60+ years....  Then Justify GENOCIDE like Khemer Rouge did to Inttelectuals and Rich in Cambodia.  Now you know why the Sultan-Agong UMNO-PAS wanted to make COUP in 2019.....so as to have this OPTION TO JUSTIFY GENOCIDE.....like What Turkey did in their PLANNED FAKE COUP....Now Turkey is ANOTHER COMING SH*T Hole with Collapsing Economy and LIRA......Malaysia IS ISLAM Hamas-Hezbollah, Iran Revolutionary Guard Supporters is promoting ISLAM over Any thing.  EVEN Coming PM Anwar Ibrahim Support STONING And CONDONE...KISS HAND of Sultan Brunei TERRORIST ISLAM SHARIAH LAW!!

The Hutus and the Tutsis were never rival tribes. They are a made-up distinction coined by Belgian colonials. The Belgians called the taller people with longer necks and lighter skin Tutsis and gave them more political power. The shorter people with a stockier build were dubbed Hutus, and shaped into the working class.

The Belgians did this to maintain control by creating a hierarchy. What they caused was eventual genocides in both Rwanda and Burundi.
It is the same attitude of governments that turned Venezuela into a shit-hole country by demonizing business owners and wealth.

4.  Make it Impossible to make money without Shariah, Halal, Islam, Racist Government Approval....Case in point is that Idiot Pahang MB forcing you to pledge Loyalty to get a business License....These States should be Abandoned by other race and Start Consolidating in States like Sabah-Sarawak.  Get Redy to SACK MALAYA and Leave MALAYA with that $$ 1.3 TRILLION DEBT.....  Before that Happens Malaysia RINGGIT WILL COLLAPSE Like Zimbabwe Dollar, Venuzela Dollar and Turkish Lira......The writing is on the WALL FOR MALAYSIA...  The government takes your Good businessa and Sell the services bask to you like the Tol, Tong Foong Bus, printing business, Car import License, Sugar import license, Rice import license, ALL NEED AP - APPROVAL PERMIT IS A FORM OF BUSINESS YOU CAN DO WITH GOVERNMENT APPROVAL!! 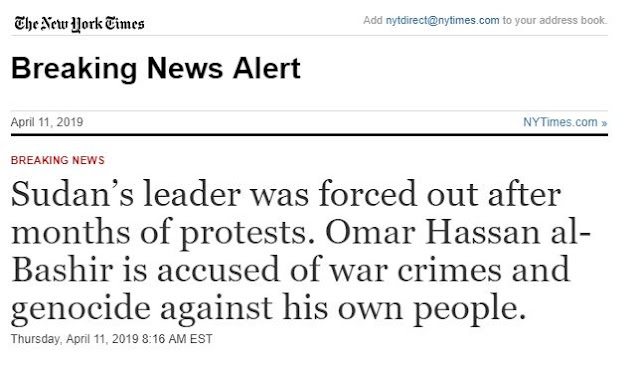 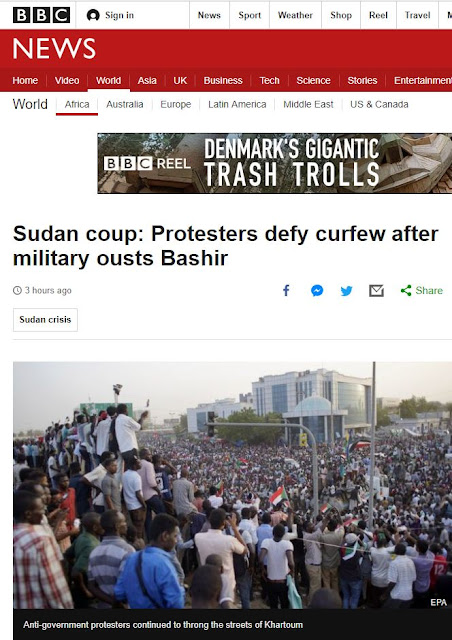 My comments : Sudan's dictator Omar Bashir has been overthrown after 30 years in power. The write up in the New York Times is lengthy. But the story is crap. A stupid waste of time.

Its just another shithole country flushing itself down the toilet.

The recent history goes something like this. There "were" about 30 million Muslims (largely African 'arab' speaking Sudanese) plus another 12 million Christian and animist Sudanese.

There has been a long running religious war (most recently since the 1970s) in Sudan between the Muslims and the Christians / animists.

The 12 million Christians live mainly in the south.

For some time now oil was also discovered and extracted mostly in the South.  Oil money kept Sudan going - it financed all the religious and other hatreds that made up Sudan.

In 2011 as a result of the Muslim - Christian hatred, Sudan got divided into two countries ie Sudan and South Sudan. South Sudan became an independent country.

But after South Sudan became independent in 2011 the oil revenues dried up.  South Sudan is landlocked and had no choice but to export its oil through Port Sudan - which is in "north" Sudan. 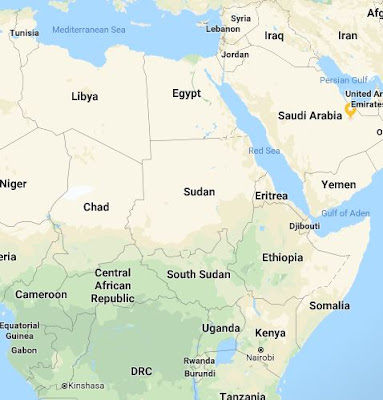 The Sudanese extracted a heavy toll on South Sudan's oil exports, demanding to share the oil revenues 50 / 50.  This was very difficult for the oil producers especially after oil prices crashed.

So in 2012 South Sudan just stopped producing oil - because Sudan was asking too much.

So since 2012 Sudan has been getting into a deeper and deeper shithole.  Before 2012 the dictator General Omar Bashir had been able to use oil money to sustain crony capitalism, buy political patronage, plaster over corruption and the incompetence (just like in Malaysia).

Once the oil money stopped, the good times ended. So yesterday on Thursday 11 April 2019 the Sudanese have "overthrown" Omar Bashir.  Just like Malay voters decided to kick out Najib and the BN on May 9th 2018,  also because the oil money has dried up (or has been substatially reduced) in Malaysia.

Sudan first popped up on my radar in the 1970s (when I was in high school) when the country was ruled by military strongman General Jaafar al Nimeiry. Al Nimeiry was doing fine until in the late 1970s he went ape shit and declared Sudan a  'shariah state'.  This was the first modern Islamic state to declare itself a 'shariah' state.

Jaafar Muhammad an-Nimeiry was President of Sudan from 1969 to 1985.
Came to power after a military coup in 1969.
Initially pursued socialist and Pan-Arabist policies.
Late 1970s he moved towards Islamism
In 1983 he imposed Sharia law, precipitating the Second Sudanese Civil War.

Declaring the sharia state was Jaafar Nimeiry's greatest misstep that has ultimately taken Sudan to :

i.  the rise of Hassan Turabi, the Muslim Brotherhood and Omar al Bashir
ii. the split into two countries ie Muslim Sudan and Christian South Sudan
iii. the continuing disaster in Sudan

Believe me folks, Sudan is going to get worse.

But the real disaster that has been hoisted upon Sudan were Hassan Turabi and the Muslim Brotherhood or Ikhwan Muslimin. Yup those same guys Nurul Izzah invited into our Parliament.

Hassan Turabi of the Muslim Brotherhood was the defacto power behind Sudan for a substantial amount of time. Here is a quick history of Hassan Turabi: 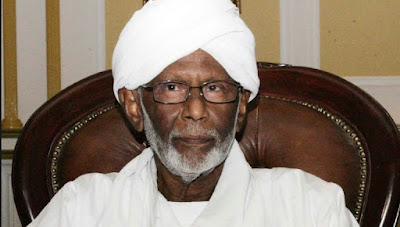 1977 "national reconciliation", Turabi allowed back from exile
Turabi and supporters played major role
infiltrating top echelons of government
"Islamizing society from the top down"
Turabi became Minister of Justice in 1979.

My comments :  In 1982 at age 22, I met Hassan Turabi in the United States, at a "Islamic" conference organised by offshoots of the Muslim Brotherhood (whom I did not know at that time).  I asked him a question 'How do you propose to handle non Muslim minorities in a Muslim majority country?'

(At that time, other than having read about  Gordon Pasha and the Mahdi's uprising in the Sudan I did not know much else about Sudan's own multi ethnic, multi cultural and multi religious complexities.)

With the benefit of hindsight over the past 37 years, Turabi's  answer  to my simple question in 1982 now  explains the destruction wrought by the Muslim Brotherhood and the total collapse of ALL Muslim societies across the universe.

Turabi flicked his wrists, pondan style, and said 'We can give the non Muslims some rights'.

This was just another way of saying, 'We can tolerate the vermin'.

And after that Hassan Turabi went home to Sudan to :

and so many other exciting things. Hooray.

Now their country has been split, they are poorer than ever.
And they have a lot more suffering coming up.
They have already entered their hell fires.
These people will never make it to "heaven".
What a miserable destiny
Posted by bumi-non-malay at 3:47 PM