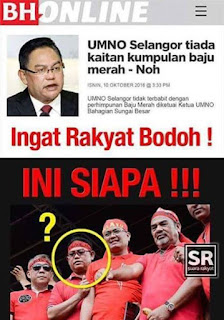 None of the bastard Defender of Islam sultan-agong-govenor melayu, their children bloggers,  UMNO-PAS Bangsat Negara have EVER written of express their concern to the plight of SUCH Insane, EVIL acts of Islam in Pakistan to a   mother being Falsely Accused of insulting a just human Prophet Mohammed.....CRAP!!!

and now we have this Deception by Islam UMNO-PAS Hudud and Jakim Jais Syriah Courts SHAM rules for muslim only tentacles reaching out to others like Hot Dog not halal and other whims and fancies these IS islam Racist terrorist Bigots thinks are not Halal.  Imagine your building, your hotel, your bus service, your laundry business, your car wash business, your food business, your temple, your churches ...your place of worship can be MADE ILLEGAL and Not allowed to Function.  You have to Appeal to the SHAM Syriah Racist UMNO-PAS-SultanAgong-Govenor Melayu islam courts to keep functioning or ELSE Electricity and Water Cut off....  Its time to DISBAND the Syriah Courts, Jakim Jais and let muslim live according to their own Moral code...Leave judgement to GOD/Allah.....


To All 1% muslim UMNO-PAS -Sultan_Agong-govenor melayu Racist terrorist in Malaysia...better Leave IS islam religion because the you are ALL facing Eternal Death Anyway because all the water and air you breath contains 0.00000000000001% Alcohol and Pork DNA.......You cannot tell your Last Prophet who is Not ALLAH that you are NOT Aware of this FACT of Breathing and Eating NON HALAL Stuff!!

Posted by bumi-non-malay at 3:35 PM No comments:

“Failed states offer unparalleled economic opportunity—but only for a privileged few. Those around the ruler or the ruling oligarchy grow richer while their less fortunate brethren starve. Immense profits are available from an awareness of regulatory advantages and currency speculation and arbitrage. But the privilege of making real money when everything else is deteriorating is confined to clients of the ruling elite or to especially favored external entrepreneurs. The nation-state’s responsibility to maximize the well-being and personal prosperity of all of its citizens is conspicuously absent, if it ever existed.

This is the way MalaySIAL UMNO-PAS Bangsat Negara(BN) use their Law and Order....  Put a Law against Logging but Allow Logging and when the Scam,  Corruption, Stealing is discovered.....like 1MDB...use Road Block, Army, ISA, IGP, OSA sultan-agong-govenor to Blockade the ability to get to the source of the problem..... these 1% Melayu Islam UMNO-PAS scumbags acts condone by Sultan-agong-Govenor then say its under investigation....SO need to Blockade to investigate...

The Sultan-Agong-Govenors councils of Malay IS Islam Rulers MUST Apologise to malaysian that they Are powerless and Lack the Resolve and Guts to go after Najib-Rosmah UMNO bangsat Negara Theft of $100 Billion ringgit and all the injustices in religious Jakim, JAIS Syriah Sham, Corruption Sham....etc...But how to Apologise when they are ALL IN THE TAKE ...collection illegal Corruption Hina Allah Money$$$$!!

They have tried to make malays forget who they are via the IS ARAB Islam UMNO-Sultan-Agong ketuanana Islam Religion ideology....but their creation of faction have divided themselves...all for Money that cannot buy safety, survival, wisdom happiness and security.  The Money Faction takes Precedent over all Islam Hudud Syriah Council of Sham Islam rulers.

Seriously do you think the celaka 1% Melayu UMNO-PAS Sultan-agong-Govenor council of CRAP/Sham Rulers gives a Damn about anything you write to them??? the suffering and Future Suffering of your Children....Like During the Surrender to Portugese, Dutch, British and japanese...they sign Surrender for their Children and Family members only...WAKE UP Say Adios to them ask IGP to figure who said adios and Let Crime Spree...Bombs and IS Islam LRT Disruption Terrorism continue...... Yes that LRT Fail Recently was IS Islam Terrorism works...Continuous cover up to Protect Islam..... Time for Malaysia Retak ...12 New District!!

Corruption flourishes in many states, but in failed states it often does so on an unusually destructive scale. There is widespread petty or lubricating corruption as a matter of course, but escalating levels of venal corruption mark failed states: kickbacks on anything that can be put out to fake tender (medical supplies, textbooks, bridges, roads, and tourism concessions); unnecessarily wasteful construction projects arranged so as to maximize the rents that they generate; licenses for existing and nonexistent activities; and persistent and generalized extortion. In such situations, corrupt ruling elites mostly invest their gains overseas, not at home, making the economic failure of their states that much more acute. Or they dip directly into the coffers of the shrinking state to pay for external aggressions, lavish residences and palaces, extensive overseas travel, and privileges and perquisites that feed their greed.”
Posted by bumi-non-malay at 4:10 PM No comments: