The Sultan-Agong UMNO-PAS-PKR-BERSATU-DAP-HARAPAN are Treating the PEOPLE OF MALAYSIA WITH CONTEMPT!!

The Sultan-Agong UMNO-PAS-PKR-BERSATU-DAP-HARAPAN are Treating the PEOPLE OF MALAYSIA WITH CONTEMPT!!

The Attack on Christians in Sri Lanka is a Sign that the Malaysia Supported Zakir Naik Terrorist Exporter to Sri Lanka, India and Now Phillipines, Malaysia is Helping Sabah-Sarawak Agenda 2020 - Sack MALAYA and EMPLOY ISREAL Methododology or JAPAN Methodology Against these Murderous Quran Inspired Malay Arab Terrorist in Malaya..HELP Orang Asli  FIRST.......HELP MALAY ARAB ISLAM OF ANY NATURE LAST......JUST LIKE AFTER SPM MATRICULATION Opportunity.....90% Arab Mediocre Malays...10% other Race...give these Racist UMNO-PAS Is Islam Sultan_Agong 0%..>ZERO Loyalty and watch them ROT!!...GIVE THEM THE CRUMBS!!!  DHIMMI THE ARAB MALAY MUSLIM MALAYS IN EVERYTHING.....BE CONSCIOUS and Spend MORE TO HELP THE OTHER RACE..........NOW Starting May  2019!!

Once they wear a Hijab, tudung, Dress like these Islamic Missionary or bearded...AVOID, IGNORE and DON'T Trade with them Even if they Are CHEAPER!!!...For 20 Years they make you slaves to their RACIST DEMEANING EDUCATION POLICY & Suffering with Stupid bahasa Malaysia and RACIST MATRICULATION Policy.....DEMEAN THEM FOR THE NEXT 600 YEARS...With HUNGER, POVERTY AND  SUFFERING!! 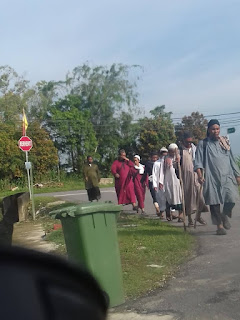 Got this from my former soldier in Sarawak via WhatsApp : Translation : "jangan terima mereka masuk ke rumah kamu.

This is what they try to do, they think that the Dayaks are all bodoh, sitting at the long houses and waiting to welcome them. Shit

There are being sponsored by Zakir Naik. That's why zakir naik is wanted by the lndian govt. As at now the modus operandi that they adapt is when they enter the kpgs, they are on pretext of selling their carpet, rags, sarong etc. They are as well trying to contact with the local kpg girls and will lure them for married so that they can stay with in the community.

This is very very dangerous modus operandi that they have. We dayaks have to be alert now please use your own initiative to handle this matter urgently or otherwise if not it could cause problems in our community later. These groups of Pakistani and some others such lranian, Syrian and some other strange lndians, please chase them out of the kpgs once you encounter them. Info

No need to fear just make sure that your duku ilang can slice through silk.


PREVIOUSLY FROM OUT SYDE THE BOX


The death of the late Mohd Adib Mohd Kassim and the SIX Bomba personnel who were sent to their deaths should not be forgotten.

Can anyone remember ANY of the names of the SIX Bomba personnel who were drowned in that 'weir' or water channel incident? Plus the drowned teenager they were trying to recover SEVEN people died in that incident in Puchong. 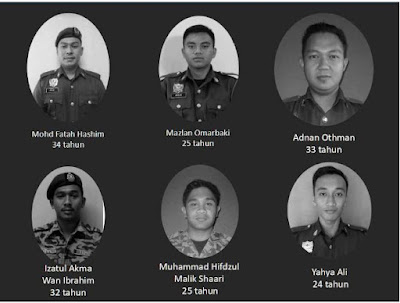 The more important question is 'DO YOU CARE'?
Or in more simple English (Communications English 101) 'Do you give a shit?'

Or are the unnecessary deaths of SIX human beings just something that happened "to someone else, dont know where, what the hell do I care"?

It only becomes an issue when say another race is involved.
Or say a different religion is involved.

Then you can see the anger, violent behavior, and the violent threats -  penganut agama setan versus penganut bukan setan. The mystery question is -  exactly who is who?

Here let me replay that video which showed those Indian boys carrying the late Adib Mohd Kassim to safety on Nov 27th 2018 in Subang Jaya.

Well, it turns out that this was the only time that Mohd Adib Mohd Kassim was in the safest hands and in the safest care  - when he was being carried to safety by the Indian boys you can see in the video.

Because other than this, Adib was in mortal danger - literally.

First Mohd Adib had been hit by a Bomba vehicle driven by his own Bomba colleagues. It was the Bomba who seriously injured Mohd Adib.

(Then after running down Adib, the fellow driving the Bomba vehicle 'went into shock' and could not 'speak' for over two weeks.  Maybe he will go into shock again.)

After the Indian boys saved him,  Adib was taken to hospital - two hospitals ie Subang Jaya Medical Center and the Institut Jantung Negara - where the real damage to his life was committed. Adib died because of incompetence at these two hospitals.

They basically mishandled him - through incompetence, laziness, tidak apa attitude, just plain stupidity or all combined.  That is where Adib died - under the care of the hospitals.

And what happened to the Indian boys? The Selangor Police arrested FOUR of them, threw them into the lock up and then took the FOUR Indian boys to Court to get a remand order (for murder) !!  The Magistrate's Court threw out their application and set the boys free.

Someone also needs to say a big thank you to the other Indian boys in the video above who helped Adib and saved him.

Unfortunately the Indian boys helped to send Adib to what they thought was  a safe place (the hospital).  Little did they suspect that the hospitals would finally kill Adib.

Then the lying started.  First they said that Adib could not speak - almost the whole time he was in hospital for over 20 days.  But now we know that he was put on weight training with dumb bells in the hospital. How can you be in a coma or unconscious or so weak that you cannot even talk  YET you can train with dumb bells?  So they were lying.

Then the Bomba truck driver who hit Adib also could not speak. He also went into shock. This is maybe SOP for the Bomba. When something goes wrong, they all go into a shock and cannot speak.  This is another lie.  They were covering up the fact that the driver had hit Adib when he reversed the Bomba truck.

The Selangor Bomba made police reports against some people who started saying that Adib was hit by the Bomba truck. The Police report was another lie, to deflect blame from their mistake. More lying.  They should be ivestigated for making a false report aka LYING.

The spin also said that it was NOT Adib in that video. It was another Bomba officer who had been beaten up and who was being carried away. But who was that other mystery Bomba officer who was injured? Until today he has not been found. It was just another lie.

Folks it is super high time that we take a very, very close look at the Jabatan Bomba.

For a very long time, the Bomba has become extremely well known to property developers for their corruption. You need the Bomba to approve the fire safety regulations before your building is fit for occupation by human beings. There is plenty  corruption involved here.

Here is a very recent example.

14 persons have been remanded to assist in the Malaysian Anti-Corruption Commission’s (MACC) probe into allegations of protecting and receiving protection money from reflexology centre operators, in which the centers double as prostitution dens.

The remand order was issued by Magistrate Ahmad Asyraf Mohammad Kamal. Among those detained were three officers with the Kuala Lumpur City Hall involved in licensing and enforcement, and three policemen, including a station chief, as well as a fireman who allegedly gave his nod for the premises to operate.

The Bomba guys have long been involved in this type of corruption. What will Malaysia Baru do about this? Same old, same old? No change?

2.  Before this of course there was the really stupid (yes it was plain stupidity) news that SIX Bomba personnel were sent to their deaths when their boss or supervisor ordered them to get into some swirling water with minimum safety gear. Plus he put ALL SIX men on the same rope.  All six drowned.

What happened after that? Has anyone been disciplined or punished for causing the deaths of SIX human beings?

What is the similarity in the case between the drowning of the SIX Bomba men in Puchong and the injuries and subsequent death of Mohd Adib Mohd Kassim in Subang Jaya ?

The answer is : LYING.

In the death of Mohd Adib almost the entire Bomba team just LIED.
Plus of course much of the 'racially challenged' media was also assisting them.

In the case of Adib being run over by one of his own Bomba colleagues the LYING also became MANIPULATION  that was done very systematically.

(As I said  IGP Fuzi Harun will not be investigating the false reports angle at all.)

But this was a statement that appeared in the media about the drowning of the SIX Bomba men in Puchong :

"Suddenly, a strong current occurred in the area causing the victims to spin in the water while all their equipment came off," A_ _ _l A_ _z was quoted as saying by Free Malaysia Today.

https://says.com/my/news/6-bomba-divers-drowned-while-looking-for-a-teenager-in-puchong-mining-pond
"Suddenly, a strong current occurred in the area .."  !!

Suddenly??  It was after heavy rains, the water flow was heavy for days, that is why that teenager drowned.  You can see in the videos that when the SIX Bomba men weer getting into the water channel the current and the swirl was very strong.

The strong current did not appear suddenly from nowhere.

To say that   Suddenly, a strong current occurred  is just telling lies.


Folks, there is something else that I must start repeating again and again.

Our masyarakat seems to have a zero value system.
They have no morals, no values, no ethics.

The incompetence, the laziness, the tidak apa attitudes, the racism, the religious chicken shit, abusing political and Police power are all just camouflage to hide the zero value system, the absence of morals and the absence of ethics.

Coming back to the topic, it is obvious that yet another government department the Jabatan Bomba has been rotting under the Malaysian sun.  The Jabatan Bomba has a huge role to play in the country. They are supposed to save lives and property - which they do very well.

Yet there are many other parts of the Bomba which need to be relooked again and improved.

Do it fast before there is another heavy rain, another riot or another massage parlour opening up for business.
Posted by bumi-non-malay at 12:30 AM